Wow, what an amazing season it’s been for the Icehawks. Champions with 1 game left to play against the Bulldogs from Groningen. Groningen has always been a tough opponent for us, they tend to bring their strongest line-up with some more experienced players from the other Dutch divisions. Ever since the first title for the Icehawks was claimed back in 2010-2011 season, the Bulldogs always finished in a close second place. Making this a rivalry one to watch for the years to come.

Let’s dive into the stats according to the NIJB website(*)

Directly after the sound of the buzzer in our last game we went live on Facebook to show the celebration and receiving of the Student League Cup, along with the medals. This also sent a tidal wave through the local ice hockey media and social networks. The local newspaper (ED.nl) wrote an article about our victory:
https://www.ed.nl/sport-regio/ongeslagen-studenten-uit-eindhoven-prolongeren-nationale-ijshockeytitel~a5afa22d

We also got featured on Ijshockey Nederland again with a longer article:
https://www.ijshockeynederland.nl/nieuws/studenten-tu-eindhoven-pakken-studententitel

Some of you might have already seen the videos of the celebrations on our Facebook page, most of our team was there to join in the festivities. For our foreign players whom already departed to their next destination, we’d like to thank them for joining us and wish them the best of luck in their new ice hockey adventures. This also goes for the players of our second team.

Speaking of the second team; they’ve had a rough road behind them playing three different teams from Joe Bar, friendly games against the Leiden Blues and Tilburg Towers. Let’s take a look at the current standings in their own Joe Bar Cup. 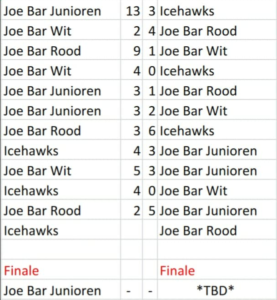 This weekend is the decider match if Joe Bar Rood or the Hawks will be in the finals against Joe Bar Junioren! Puck drops at 21.00 on Sunday the 11th of March.

Our beloved coach Roger Provencher got featured in an amazing article written by Cursor TU/e. (Both Eng and NL versions here: https://www.cursor.tue.nl/en/news/2018/maart/week-1/the-ice-hockey-coach-and-mailman-who-brings-a-smile-to-every-face/ ) We couldn’t be more thankfull for our coach. I’m sure that all the Icehawks, both present and past, can agree that Roger never gives up. This is evident in the results from our second team whom have shown an enormous amount of progress. Going from a 13-3 defeat to a 4-3 victory against the same team!
Our captain Ian Coumans mentioned this in the article by Ijshockey Nederland “De ontwikkeling van sommige spelers binnen de club is ongelofelijk. Dat onderscheidt ons van ieder andere club.” (The development of some of our players within the club is incredible. This separates us from any other club). Having had the pleasure of Roger as an ice hockey coach he’s not only helped the future generation of Dutch ice hockey (Kemphanen U12-U16), but also improve the mentality of so many teammates who’ve been part of the Icehawks. He’s a living legend among anyone who’s been part of the ice hockey scene in Eindhoven. Just mentioning his name still brings a smile on the face of anybody who’s played with him during his pro career with the Kemphanen or even has the pleasure of having him as a coach during their youth.

Last but not least, this year we’re organizing our international tournament again! This will take place the 21st and 22nd of April 2018. More info here: http://icehawks.nl/tournament
On April 3rd 2014 Juan Enrique López Carcelén passed away at the age of 24. To remember him, the Icehawks have decided to name their annual tournament after him. Juan joined our team in 2011 and was one of our best, most enthusiastic, most warm and friendly, players.
Keep an eye on the page for more updates!

Will the Icehawks manage to secure another title next season? We’ll have to wait and see. In the meantime, there’s still some games to be played. The NSK is just around the corner, our own tournament, the Joe Bar Cup finals, etc. Keep an eye our on our web page and Facebook page, we’ll keep you updated with the results!