Icehawks keep up their streak

Since our game against Den Haag has been moved, the game against Enschede Slapping Studs was the first of 2017. This game was a clash between the number 1 and 2 in the competition, both very strong and packed with national and international talent.
First period ended in 5-0, securing a strong lead in the game. After that the match got rougher and a lot of penalties slowed down the play on both ends, resulting in 2-2 in the second and 2-2 in the third period. total score: 9-4 win for the Icehawks.

Amsterdam was difficult to beat in the away game, with the Hawks leading by 1 goal at the end of the second period. At first the Icehawks had trouble getting the puck out of the defensive zone, allowing Thor to control the game. Score was opened by a powerplay goal and after 10 minutes the pucks started flying in with goals by our Scandinavian tandem Könönen and Helcl Øverli. After the first period the game really slowed down, due to some injuries on our side, improved goaltending including some big saves by the opponent and a more conservative approach by our coach Roger Provencher to keep our net clean. An unfortunate tip-in resulted in an own goal and the last goal of the game. Total score: 6-1 win.

With only a few games left to play the Icehawks have set their sights on their third championship.

Half of the season is over: Icehawks stay strong at the top!

The Icehawks were playing well in this game, substituting the absent Victor Liang with our new Norwegian player Markus Hecl Øvili in the first line, who scored 6 goals. The game resulted in 12-0. A third shutout and fifth straight win this season.

After the game our coach Roger Provencher said the following about the game and the season so far:

“We played very well this game, but still have some points to improve on. We’re on the right track [for the championship] now and I hope we can keep up this level of hockey for the remainder of the season. Thanks for everything guys!”

The Icehawks went to Amsterdam with mixed feelings, although Thor is currently in last place, they were able to win the game against Groningen. Furthermore the Icehawks had to play without some key players like Könönen, Machiels and Hecl Øvili. In the first period the Hawks had the upper hand, scoring 3-0. This changed after the first break, having trouble to pass the Finnish goalie and allowing two goals to be scored. The team managed to pull themselves together in the last period, scoring two goals early in the period and again on the empty net. Making the total score 6-3.

A reporter from folia wrote an article about the game (in dutch). The coach mentioned in the article isn’t our regular coach Roger Provencher, since he was not able to join us in Amsterdam.

Our next home game will be in 2017, on the 8th of January at the IJssportcentrum Eindhoven vs. The Hague Fire Birds.

END_OF_DOCUMENT_TOKEN_TO_BE_REPLACED

Icehawks take the lead! Win against Nijmegen and Groningen

The Saints are known as a team with a core of experienced players and therefore a difficult opponent. The Icehawks’ fast paced offensive players were not able to score until the 7th minute of the first period, due to the good goaltending and energetic forechecking of the opponent. Our first offensive line, (Könönen, Liang and Pietiläinen) really started finding the back of the net in the second half of the period and scored another 4 goals. The second period was slower with some goals from our second and third offensive line. Afraid of declining work effort and dangerous breakaways, like wich happened in Enschede, the Icehawks decided to push harder after the second break. Passing went better, powerplays were utilized and fatigue was setting in, allowing to score another 10 goals, resulting in a 0-18 win for the Icehawks, a second shut-out of the season.

A win in Eindhoven never means a guaranteed victory in Groningen. The long drive, some injured players and the flu season meant that the Icehawks couldn’t play full strength. The second line compensated for the weakened first line, with goals by Könönen, Machiels (2) en Van Basten in the first period, making it 4-0. After the first period our renewed first offensive line started finding the back of the net as well, but the Bulldogs managed to score on a breakaway. (3-1; Könönen (2), Liang). The game became more aggresive in the third period, locking up the game for the Icehawks due to the penalties. Groningen was able to score and again during a 3-on-5 penalty kill. The Icehawks took the 2 points home and have set their sights on the trophy!

Next games:
Sunday 27th of November home against Utrecht Buccaneers
https://www.facebook.com/events/1700371053618271/
Friday 2nd of December away against Amsterdam Thor

Sunday the 27th is what the NIJB calls “Super Zondag”, due to the finals for U12, U14 and U17 championships. These games will all be played in Eindhoven starting from 10:00 AM.  More info here: https://www.nijb.nl/cms.php?Page=&Article=13919

If you want an awsome hockey sunday, make sure to be there on time! Both of the Icehawks teams will be playing that day starting with the first team at 19:30 on the inside rink followed by the second team at 20:30 at the outside rink!

The season so far…

Now that we’ve had two games behind us, we’re getting ready for the 3rd game against the Radboud Saints.

The first game was a good warmup round to see how the new members played together with the old against the Slapping Studs from Enschede. The game was won in convincing fashion with 0-11. (0-7, 0-3, 0-1), resulting in the first shutout of the season for our goalie Martijn van Maanen.

The second game was our most important home game of the season, against the champions of last year, the Bulldogs from Groningen. With our team fresh out of a win, it looked like it was going to be a very exciting game. It took 02:24 before the first goal was scored, after that they started adding up one after the other, resulting in a 17-2 home game. (8-2, 4-0, 5-0)

One of the refs got some footage from the first period and the first three goals.

On the 20th of November, we’ll be visiting Groningen for the rematch.

We also have an amazing crowd that showed up to support the Icehawks, feeding them with energy after every play.  We hope to see everybody there for the next home game as well, the 27th of november against the Buccaneers from Utrecht. There’s already an even up on Facebook so go check it out!

After these scores these are the current standings:

If we continue to play the same way we’ve done in the first two games of the season the Icehawks look unstoppable and soon a 3rd championship trophy will be in our grasp.

Posted in News by admin Leave a comment
30 September, 2016

Hello everyone!
All the game dates have been published, here are the dates for our home and away games! All our home games are free, which means there’s no reason you shouldn’t come watch our games!

Come show your support at our home games or away games!

Posted in Matches, News by admin Leave a comment
19 August, 2016

UPDATE: The Icehawks will not accept new applications for this season for unexperienced players. We will organize new try outs and introduction practices in September 2017.

Are you intrested in joining the Icehawks this year? Would you like to join in on an introduction practice?
In that case, make sure to sign up by sending a mail to: info@icehawks.nl and sign up on the Facebook event:
https://www.facebook.com/events/1813382915557210/

If you don’t have skates we can provide them for you, make sure to let us know what size! The costs for the rented skates is 5 euro’s.

Let us know if you got any questions, Kind regards,

Icehawks.
Posted in News by admin Leave a comment
14 October, 2015

The game schedule for 2015-2016 has been announced! Come and support your local team in their effort to renew the championship this season.

All games are played in the Ijssportcentrum Eindhoven (Antoon Coolenlaan 3) on sundays at 19:45h. No entrance fee! 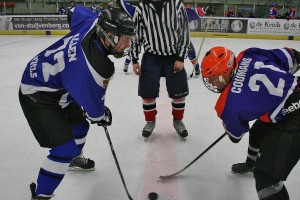 This monday (21st of september) an extra introduction practice will be held at our hockey rink. Send an email to info@icehawks.nl if you want to join! Be at the rink at 21:45 h.

This is the last possibility this year to try out the most fantastic sport on earth!

Are you a student at Fontys or TU/e and do you want to try the fastest team sport on earth? Send us a mail at info@icehawks.nl and sign up for the introduction practice! please include your shoe size in the mail if you don’t own a pair of skates.

Can’t skate? No problem. Our Canadian hockey coach has been teaching students to skate for over 3 decades.

Already an experienced hockey player? Send an e-mail to info@icehawks.nl and join a regular practice.

You have your own skates? Bring them! Otherwise we’ll provide you with everything you need to join the practice.

E.S.IJ.V. Icehawks is the student hockey club of Eindhoven, affiliated to the TU/e and Fontys Hogeschool. Icehawks offers hockey on all levels, for beginners and advanced players. Our team consists of Dutch and international students, boys and girls. Besides playing the greatest sport on earth we also have activities like team weekends, bbq, team dinner and so on..

Still not convinced? Check out our video in the previous post!