The student team of Eindhoven
Join us!

We are the Eindhoven Student Icehockey Association (in Dutch “Eindhoven Studenten IJshockey Vereniging), “Icehawks”. We train and play our home games on the Ice Sports Centre in Eindhoven, at the Antoon Coolenlaan, which has one of the best rinks in The Netherlands.

Right now we have three teams – one participates in the student league, another one plays in the second division of the Dutch championship and the third one plays mostly friendly games versus other teams in Eindhoven, Tilburg and Den Bosch. We also visit tournaments (both national and international) which is always tons of fun, because parties are of high priority as well. In recent years we have attended tournaments in Milan, Munchen, Aachen and Freiburg. A couple of year ago we hosted our own international tournament, with teams from Germany, Norway, Belgium and the Czech Republic.

During the summer, there is no ice in the rink (because of the ridiculous amount of energy it would take). So instead we play inline hockey. Team building activities include a weekend away, a barbeque event, a New Year drink, and a visit to the cinema.

Icehockey probably seems like an expensive sport, because of the protective gear and sticks. However, we make it affordable for you. During your first year, you can rent your gear for 10 to 15 euro per month. If you decide to continue playing, you buy the gear for less money as you have already paid for part of it.

So.. What are you waiting for? Come and play with us!

For the new academic season, we are looking for new players. They can be the following: rookies (people who have NO hockey experience or very little) experienced hockey players who want to join our second Read more… 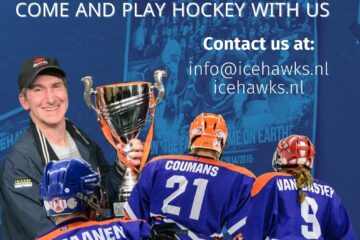 Are you coming to study in the Netherlands next season? Already a student and want to start playing hockey? Want to join the best Student Icehockey Team Eindhoven has to offer? The Icehawks are looking Read more… STUDENT LEAGUE CHAMPIONS, 2nd DIV. PLAYOFFS AND LOCKDOWNS What a year it has been. Unfortunately not a full season for the Icehawks but one with a beautiful ending.The Icehawks have started the year in good Read more… Introduce yourselfHi, my name is Stephanie and at this moment I am a researcher on TUe. I am from Mexico City. I came here to study and now I am doing research. Not too long Read more… 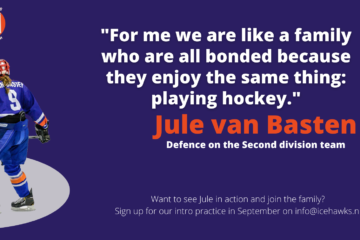 Introduce yourselfHi, my name is Jule van Basten, a Dutch girl who studies chemical engineering (currently doing my master thesis). I play defence for the Icehawks apart from that in my second year as a Read more…

Introduce yourself Hey, I am Marek Lavorenti and I came to Eindhoven for my Ph.D. position within Dutch Institute for Fundamental Energy Research which is fortunately connected to TU/e in a way so I was Read more…