The Icehawks are welcoming a lot of new players this year, 17 in total. We are happy to expand our diversity in the team with some new players from Latvia, Cyprus, Canada and many other countries. This being said, the Icehawks have reached their limit for this season regarding unexperienced players, for more info check the page ‘want to join?’.

The Icehawks have played their first two games of the season and have won both! this means we’re the only team in the league that hasn’t lost a game so far. Game reports after the Read More.

Next game is next week, also our first home game of the season against Utrecht Buccaneers. The game will be played on the outside rink and starts at 21:00, so bring your thermos!

The Icehawks have been invited for an exhibition game against the University team “ICE-Emperors” from Aachen (D). They will play in an arena filled with 3000 spectators who are attending the UNI Cup tournament, an amateur hockey tournament and charity event.

Our first game was 7th of October in Nijmegen against the Radboud Saints. After 10 minutes Nijmegen scored the first goal but Ian Coumans evened the score 6 minutes after that. In the second period the throttle went to the floor and the Hawks scored 5 goals, letting in 1. The third period was a 1-3 win for the Icehawks resulting in a 9-3 win.

This Sunday the Icehawks traveled to the North for their encounter with the Bulldogs Groningen. The Bulldogs have been a big favorite for many years winning the cup or finishing runner-up. Besides that, a 2,5 h drive is never good for an athlete before a game. So this was a though one.

After the first month, these are the standings in the Student League: 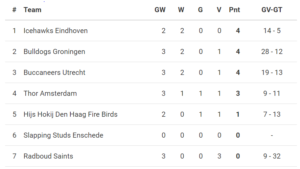