Another 4 points for the first team, and a friendly game from the second team!

The first team of the Icehawks stays on top with two wins. The second team played a friendly match against Joe Bar White in Eindhoven. They played really well with some rookies gaining their first match experience. Although they played well the game ended in a 0-4 loss. 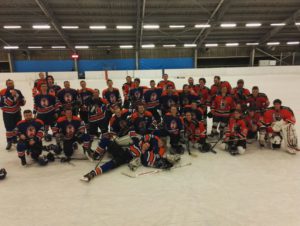 After two speedy goals by Brett Speed in the first period and another one in the last minute to complete his hattrick, the Icehawks were destined to win this game. The flow changed in the second period, just like the game against Amsterdam, when the Buccaneers scored two goals without repercussion. The Icehawks regained their play in the last period scoring two times but received a goal as well, ending the score 3-5 and 2 points in the pocket for the Icehawks. A hard fought win for the Icehawks. The Icehawks went on a rampage this weekend and obliterated the Firebirds with an impressive 19-2 win. The first 10 minutes of the game the Hawks had some resistance when the score was 2-1. But soon after that 3 more goals were scored, followed by two periods of 14 goals for the icehawks and 1 against.

This big win has resulted in four Icehawks players in the top 5 players with the most points in the league!

7th of December. Exhibition game against Aachen University at the Uni Cup in Aachen

Season start: straight to the top!

The Icehawks are welcoming a lot of new players this year, 17 in total. We are happy to expand our diversity in the team with some new players from Latvia, Cyprus, Canada and many other countries. This being said, the Icehawks have reached their limit for this season regarding unexperienced players, for more info check the page ‘want to join?’.

The Icehawks have played their first two games of the season and have won both! this means we’re the only team in the league that hasn’t lost a game so far. Game reports after the Read More.

Next game is next week, also our first home game of the season against Utrecht Buccaneers. The game will be played on the outside rink and starts at 21:00, so bring your thermos!

The Icehawks have been invited for an exhibition game against the University team “ICE-Emperors” from Aachen (D). They will play in an arena filled with 3000 spectators who are attending the UNI Cup tournament, an amateur hockey tournament and charity event.